Diary of an Intolerant Mum: Week Two, a weekend in Norfolk

Well here I am again, week two into my restricted diet after finding that I’m intolerant to various foods. This have been a lot easier this week, and this was despite going out for a meal or two…ah, hold on Rebecca, what about Roast Potato Gate? I’ll get to that later!

You’ll have to excuse my idea of a ‘week’ for this blog entry, humour me and pretend that this week started on Friday 26th August and ended Sunday 4th September! blogging these last few weeks of the children’s summer holidays has been nigh on impossible, so much to do in so little time (is it just me or did those weeks fly by?) The reason I’ve incorporated the UK Bank Holiday weekend is because the family went to Hunstanton from Friday to Monday and I was able to eat surprisingly well (except Roast Potato Gate).

Last diary I broke the events into Breakfast, Lunch and Dinner. This time I’ll break it down into days.

Friday 26th – arriving in Norfolk and stocking up.

We started early as we always do with a trip to Sunny Hunny. It’s tradition now to meet with the in-laws at the Kings Lynn Sainsbury’s for breakfast. Beth ate a cheese and ham omelette and we also got a gluten free granary roll so she could have a jam roll too (just in case the omelette was too egg…apparently there is such a thing!) I tucked into a plate of fried tomato, two rashers of bacon and baked beans with a black tea. Delicious!

Before we took over the cabin we decided to visit Wells-next-the-Sea for some compulsory crabbing. Whilst my three hung precariously over the edge my sister-in-law and I went for a wander and discovered some delightful cafes and restaurants that serve gluten free more about these in another blog I’ve written entitled; North Norfolk Gluten Free Weekend. What with it being too early for lunch I opted for dressed crab (another compulsory act) goodness knows what I do if was also intolerant to shellfish!

Once settled into the cabin and unpacked I popped to Tesco to top up and brought salad…lots of salad and sushi and soup! I’d already baked a loaf of gluten free, vegan bread to take with me so the idea of fresh basil and tomato soup with Rana’s Bold Buckwheat Bread appealed to me. In fact, that’s what I had that evening.

Saturday 27th – eating on the go when you’re intolerant

Between trips to the Sealife Centre, Boat House Cafe and the amusements I managed to eat very well indeed; muesli for breakfast (not forgetting my 60ml of Symprove 10mins prior to this) a delicious salad, apple tart and black tea for lunch and a sushi salad for dinner…I also pigged on a whole bag of prawn crackers that evening too, most satisfying!

Extreme close up of my dinner there but it was awesome so, well worth the pixels!

Breakfast went according to plan, no room for error there. It wasn’t until lunchtime when we decided as a family to have the carvery on the camp site. be under no illusion here, there was no foul play, no cross contamination, just dippy old me reverting back to tolerant mum! As always I had pre-checked the carvery for CC and any hidden gluten. The chef was very helpful and told me exactly what Beth could and couldn’t have, there was even a special jug of gluten free gravy delivered to our table. When it came to my turn to choose from the carvery I opted for beef, no Yorkshire, no stuffing, no sausage and no gravy…just like the chef had recommend Beth…then I proceeded to pile veggies, parsnips and roast potatoes onto my plate. I remember vaguely something in my subconscious telling me something’s not right here, but I buried the feeling. Before my last mouth full of dinner I was becoming increasingly aware that my tummy was growing and my jeans were under a considerable about of stress! That was when it dawned on me; POTATOES! I’m intolerant to potatoes! I abandoned dinner and floated back to the cabin (floated?) that’s what it felt like at least, a very bizarre feeling of being lightheaded mixed with detachment! I slept for hours before I felt normal.

Fish and chips…minus the chips! Never wanting to repeat the events from the day before I was careful not to make any more silly mistakes. We took the kids to PYO in Thornham, ate copious amounts of plums and apples and thoroughly enjoyed Fish and Chips form Eric’s Cafe (again, more about this in another blog) I opted for the battered fish and salad and could have eaten it three times more, it was sublime! I even got to dive into a super refreshing blackberry sorbet…icecream being something I miss dearly at the moment.

…and the rest of the week?

Fresh tuna bought from Norfolk and gently fried then added to a salad, rice noodles with stir fry veggies, plum crumble and gluten free/vegan apple cake and lots of homemade bliss balls and grain/seed bars … this girls getting her groove on! and Yes … I AM feeling much better for it! It’s still early days but I can get through a day without napping now, I have more energy, my skin is looking much better and I’ve lost a little weight, can’t be bad? 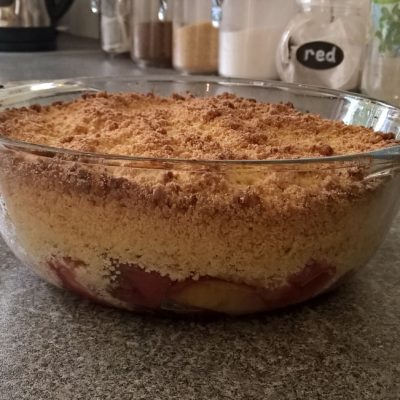 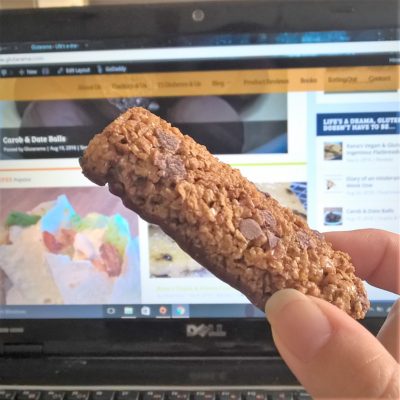 All content belongs to Glutarama. All photography & text copyright Glutarama © 2015-2019 unless otherwise indicated. All rights reserved.