Ready, Steady, Roll | having our free from cake, and eating it!

My friend Carly loves board games, no scrap that – she is mad about board games and her daughter Kate is just as potty about them, this is how I found the hidden gem that is Ready, Steady, Roll.

Now I appreciate that my readers come from far and wide across the interweb so I encourage you to comment below on any wonderful little gems like Ready, Steady, Roll you may have in your local area. For now though, indulge me, and who knows if you’re not local, maybe you’ll pop by Bedford and stop by for a game of Rhino Hero Super Battle!

NOT an AD: this post was written to say thank you to Ready,Steady Roll for the wonderful time we had there, I was not obliged to write a review. I was so impressed by this hidden gem of a place to visit that I was moved to write a post in support of Darryl and his families small business in the hope that the word spreads further. (Logo images courtesy of Ready, Steady, Roll)

So what is Ready, Steady, Roll?

So Ready, Steady, Roll is a wooden studio-style café with a whole floor to ceiling wall of board games, it’s cosy, it’s bright, it’s inviting and it’s the best two hours of fun I’ve had in a very long time.

Darrell and his wife Charlotte run the café together, in his words;

I’ve always loved to play a board game with family and friends, and a few years ago, I discovered that there was a whole world of board games beyond Monopoly and Risk so I dived right in!

I got many new games, playing with friends, family and my children. Eventually, my collection grew rather large, so we decided to share it with the world and hosted our first ‘Pop Up Board Game Cafe’ on the 31st of August, 2015. It was really popular!

I love the fact that Darrell and Charlotte have been able to make a business out of fun and laughter. It’s not just clean family bonding time; it’s good for the soul and excellent for mental health. My face hurt from smiling so much and my voice croaked following laugh after laugh.

over 360 Board and Card Games for you to play

Once sitting comfortably we were asked what games we’re familiar with, what do we like? We replied with the bog standard ‘erm, err, well……..Monopoly?’

Oh God! What were we doing there, we had no knowledge of games beyond being banker and arguing over the car and the iron in Monopoly and deciding who was going to be Colonel Mustard in Cluedo, we were frauds, abort mission, ABORT!

Darrell calmly replied, ‘well there are seven of you, so let’s start with a good icebreaker to get you going…Just One should do the job’. He then took our orders for drinks and we were off; game on!

And that was that, as one game ended Darrell came up with another perfectly suited game for us to play, at one point we spilt into two teams so five could play Cluedo whilst Carly and I battled to the death in Rhino Hero Super Battle…I may have exaggerated that a little…I knocked down a fairly impressive construction of cardboard game cards, nobody died in the process. 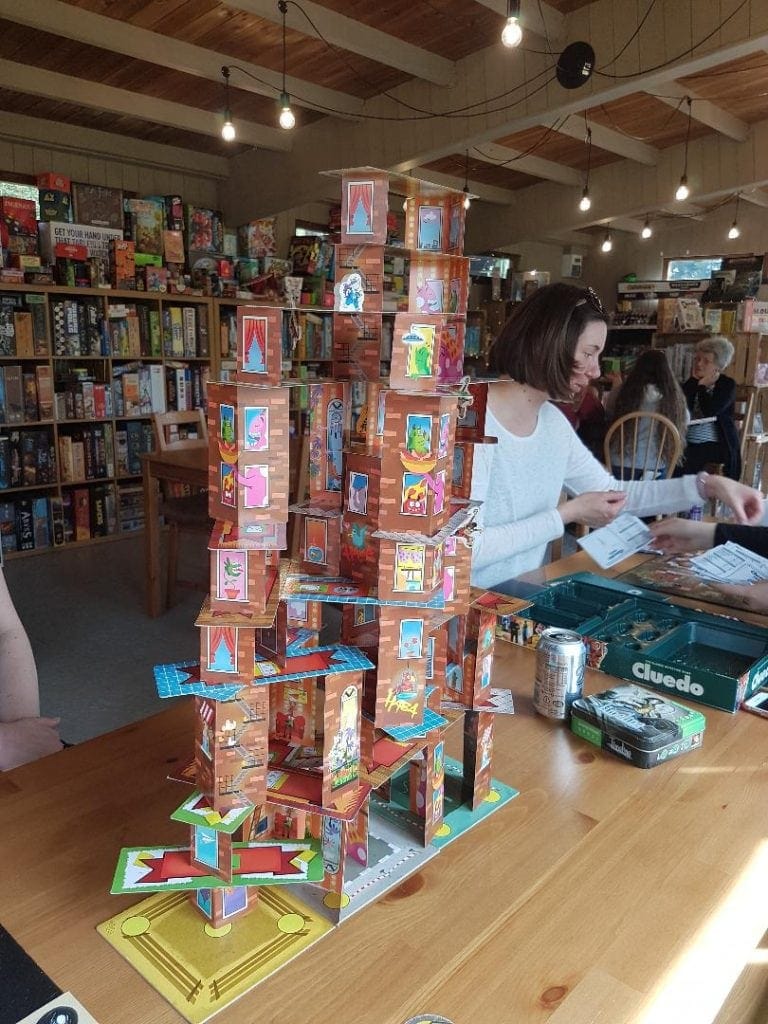 In the two plus hours we played we managed to work our way through;

I am ashamed to say that that is more games than I have played in ten years! I’ve found playing games with my family a rather stressful experience in the past, and given up on the idea of trying again. For a couple of rounds of one game I sat out, partly because I was crap at it and my brain wasn’t quick enough and partly because I was in awe at Lewis’ ability to play so well and accept defeat when necessary. I was amazed at the speed at which his mind could process things and how his anxiety about a new place melted and he flourished.

For those new to Glutarama, Lewis is autistic and while he is high functioning, there are the inevitable, dare I say, blips in his character when it comes to new places, understanding something new and not winning! Ready, Steady, Roll made me stand back and pay attention to my limiting beliefs about what Lewis could achieve and I took the wrap across my knuckles in faith, another victory to us.

Ah yes, I was so excited to tell you about my rekindled love of board games that I forgot about that bit! Well my dear free from followers, you’re in for a treat should you frequent Ready, Steady, Roll anytime soon. Charlotte just happens to be a blooming good baker and is very mindful of like-minded gamer folk who have restricted diets. Therefore, Charlotte ensures that there is always a free from bake of some description on sale for you to munch whilst working out if it was Miss Scarlett in the library with the dagger. 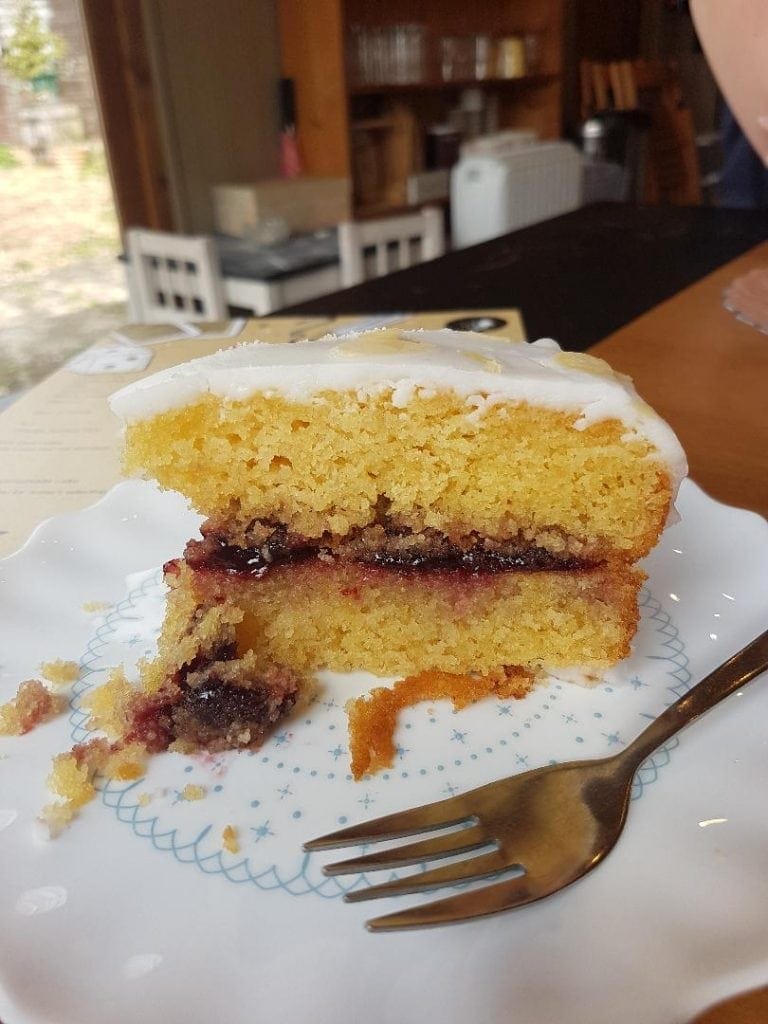 The Menu (subject to not being gobbled up already)

In addition to this there are coconut and soya milk alternatives

The cake I had was Cherry Bakewell and it was so light and moist, I could have eaten two slices despite them being big fat wedges, mind you, that would have left very little room for my two coconut latte’s…and trust me, I needed the caffeine hit to keep my reflexes up against the teen army who were beating me hands down in that department at Ghost Blitz.

So there you have it, all that remains is to say that we will be going back again and quite frankly I cannot wait.

For information on the cost (prices start at £1 per person for a table for 2hrs – I kid you not!) check out the Ready, Steady, Roll website.

A little bit of olde English trivia; you can’t have your cake and eat it!

Oh one last thing, after I wrote the title of this post it got me thinking, where does the saying ‘you can’t have your cake and eat it’ come from. I’m sure I’m not the only who does this. Well, lucky you I did a bit of research and one of its earliest records goes back to a letter on 14 March 1538 from the Duke of Norfolk, to Thomas Cromwell. It wentlike this; ‘a man cannot have his cake and eat his cake’ but even better I found that this type of saying appears in many languages but the cake is replaced with other less tasty nouns, for example

in Czech ‘you can’t sit on two chairs at the same time’ – wise words indeed!

In Bulgarian ‘you can’t have the wolf fed and the lamb intact’ – okay, gory but again true!

In Danish ‘you cannot both blow and have flour in your mouth’ – erm?

And finally in Hungarian ‘It is impossible to ride two horses with one backside’ – the mind boggles!

Oh dear, this little history lesson of phrase origins seems to have led me off on a tangent again doesn’t it?

Well that’s you’re wrong, so there!

This last piece of my posts jigsaw puzzle leads very nicely into a final word about Ready Steady Roll. After offering session to schools they discovered that there wasn’t a board game out there that catered for whole class size groups…so they only went and made their own!

Our first series is called Roll into the Past and begins in the Stone Age, teaching pupils about prehistory, while also promoting lots of cross-curriculum stuff, like maths and British Values. We are working on more games in the series, including the Bronze Age and the Iron Age.

Click the image and you’ll be able to read more about their very own game and future ideas for further educational historical games.

If you liked this review for Ready, Steady, Roll, then scrapbook the love over on Pinterest

I really love to read your comments and feedback and will always comment back. Do drop a line in the comment section if you liked this review, I would love to hear your thoughts, even better, if you take my advice and visit Ready Steady Roll then take a picture and do tag me using the hashtag #Glutarama on Facebook, Twitter and Instagram. Subscribe to my email list so that you get all my reviews and recipes straight in your mailbox.

If you’ve only just happened across my blog Glutarama, then you may also be interested to know this is not the main topic I write about, the majority of my posts relate to free from recipes and food reviews, as our family are affected by Coeliac Disease, egg, dairy other intolerances it keeps me busy in the kitchen, but boy do I have fun experimenting for my family and followers.