My goodness this has been a mammoth task to pull this post together, but I’ve loved every minute of making my homemade sushi that’s both gluten free and vegan but life kept getting in the way the last few days, more about that in another post, so actually finding time to sit down and write this up has been challenging!

I’ve made gluten free sushi twice now and I’m smitten, it’s not a food I suggest someone making if they’re in a hurry, or have little patience in the kitchen but if, like me, you love to play with your food (flashback! Mum was always saying that to me as a child) then this will be right up your street. It’s all in the preparation, have the rice made, veggies prepared and chopped and you’ll develop a sushi conveyor belt.

My first step was to buy a sushi making kit, I bought one from Amazon along with a Nigiri press. The kit came and, surprise, surprise had no instructions on how to use it. I was left with a box of plastic shapes that made no sense to me…that is until I actually plucked up the courage to use it (this took me about four months, but in my defence I didn’t have a kitchen for some of that time) This week I made sushi again and this time I photographed each step in the hope that anyone out there who has homemade sushi-nerves will conquer those fears and have a go.

How to assemble your sushi kit

As you can see these kit elements make a small square sushi roll and a large circular sushi roll. The full kit I bought also makes a heart shape (bit twee for me, but guess I’ll make use of it at some point?), a large triangle and a huge square, neither of which I’ve attempted yet..that’s homemade sushi master class No. 2!

I’ve mentioned above that I recommend getting all your prep done in advance otherwise you’ll end up getting flustered…or is that just me? To make the sushi rice I used;

250g sushi rice (you can get this at most supermarkets cheaper than I bought online…live and learn!)
375ml water
75ml sushi seasoning (again, cheaper in the shops)

I use a Jamie Oliver Rice Cooker for all my rice, I bought it years ago at a dear friend’s Jamie Oliver Party and I’m so glad I did (I’m terrible at making rice normally!) To make this is the pot all I did was add the rice, add the water, cook on 900W for 6mins and leave for 20mins. After 20mins I removed the lids, added the sushi seasoning, mixed to combine and left for a further 10mins (lids still off) before using to build the sushi.

Method with out Rice Cooker

Add rice and water to saucepan, bring to the boil and reduce to simmer. Cover and simmer for 20mins. Remove saucepan from heat, stir in sushi seasoning and stand for 10mins.

I love to use vibrant colour in my sushi, it’s more effective and these veggies taste gorgeous; cucumber, peppers, avocado. In these sushi rolls I just opted for cucumber and red, yellow and orange peppers. Simply roast or fry the peppers first, if you’re not keen on the skins then heat under a grill and pop the peppers into a sandwich bag, leave until cool. The steam effect loosens the skin and you can simply peel it off. Cut your veggies to the size you desire. I’m being a bit fussy here but try to keep the veggies to the same size, it just works easier when your building and looks more uniformed in the final product. 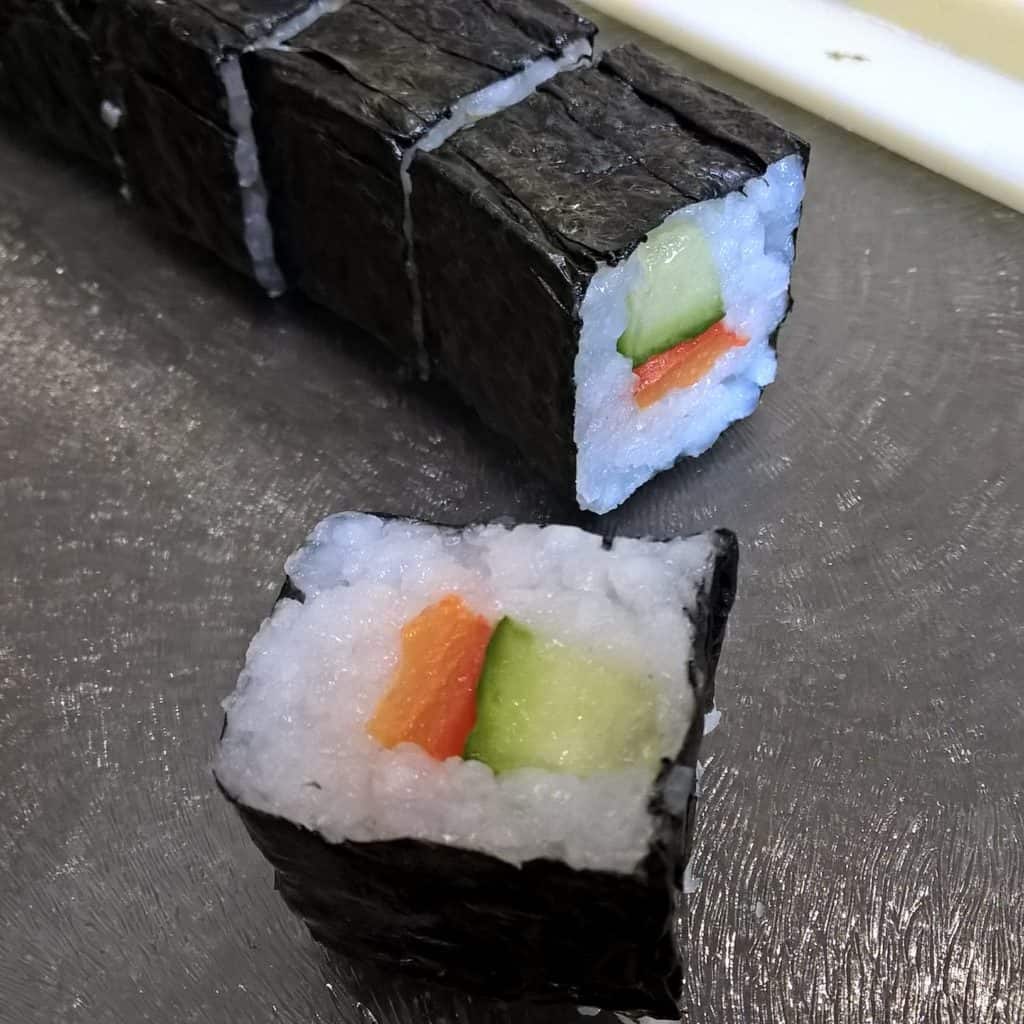 To make this small square sushi I used red pepper and cucumber. I’ve not mentioned seaweed sheets yet, these can also be bought from your local supermarket normally is packs of 5 sheets rrp £1.70 so a little cheaper then I’ve found online. The sheets fit the width of the sushi kit perfectly with a little excess in the overlap, I simply cut this off (sheets can come perforated but I use scissors as they are quite delicate) Any spare bits of seaweed I keep back for the Nigiri sushi. 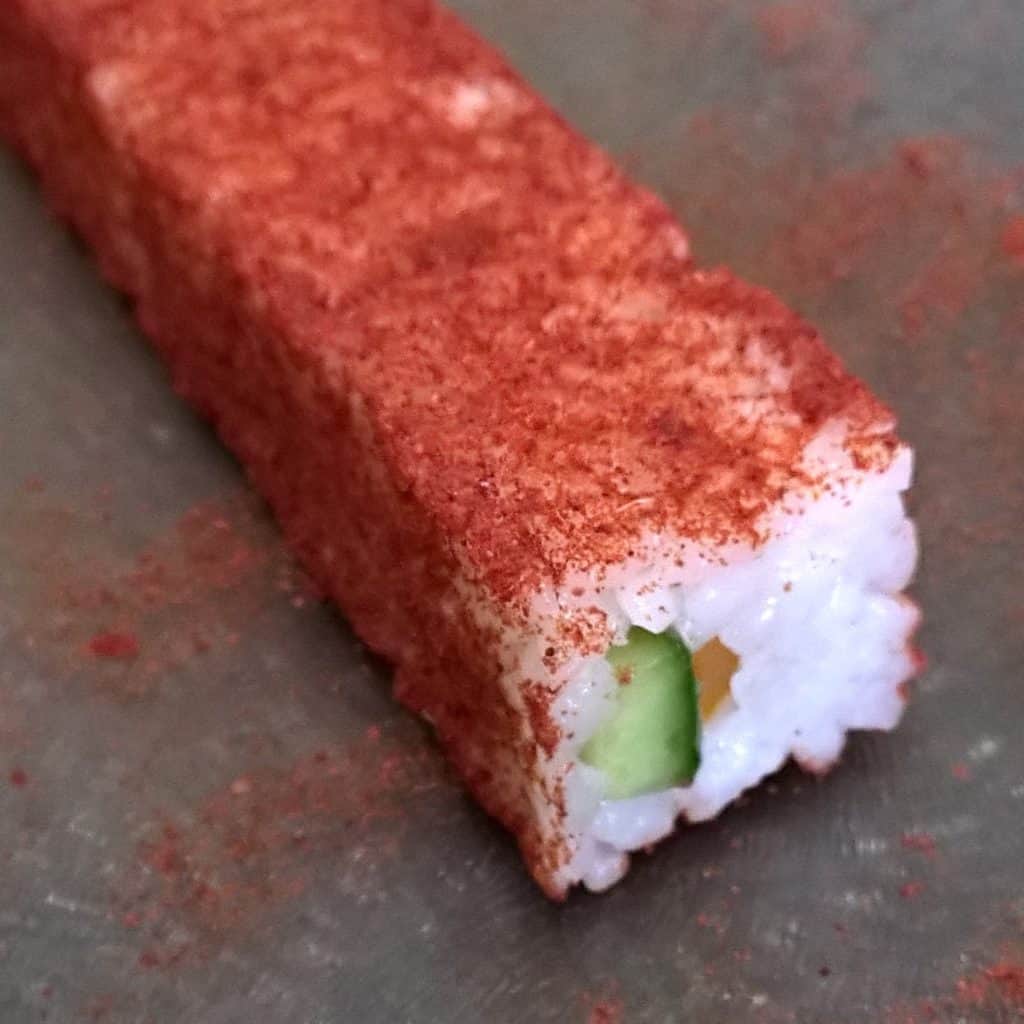 To make this small square sushi you need to ensure you pack the mould tight with rice as there will be no seaweed to help keep it’s shape. I’ve coated this roll in paprika to compliment the peppers but previously I’ve used black or white sesame seeds. If using fish you may wish to roll in fresh dill? 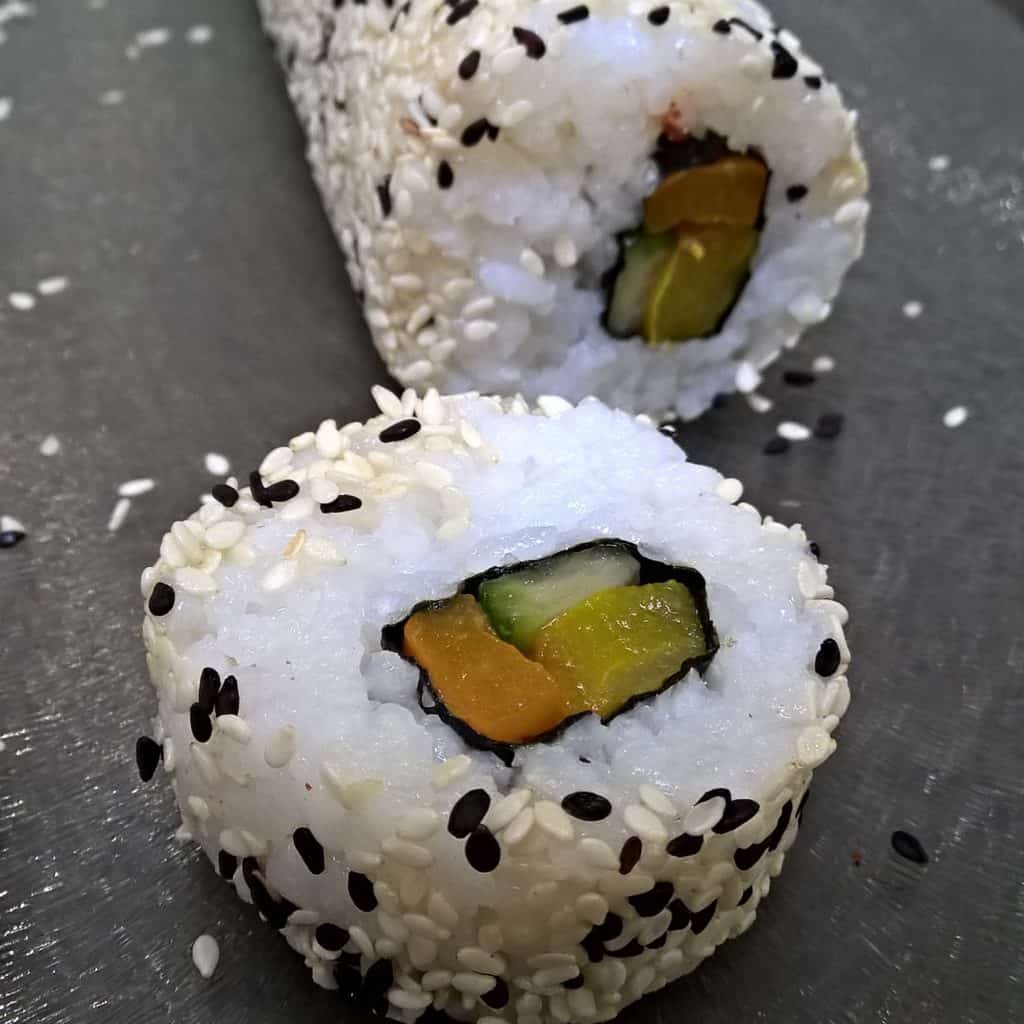 This is me just showing off now, in all honesty, it may look technical but it’s really easy to make this roll. The first time I made this size roll I used seaweed inside and outside the roll, this time I decided to spare the second seaweed sheet and roll in mixed sesame seeds instead, the same tip applies to the sushi roll above, remember to pack the rice super tight to create a more sturdy structure, especially when it comes to cutting the roll. 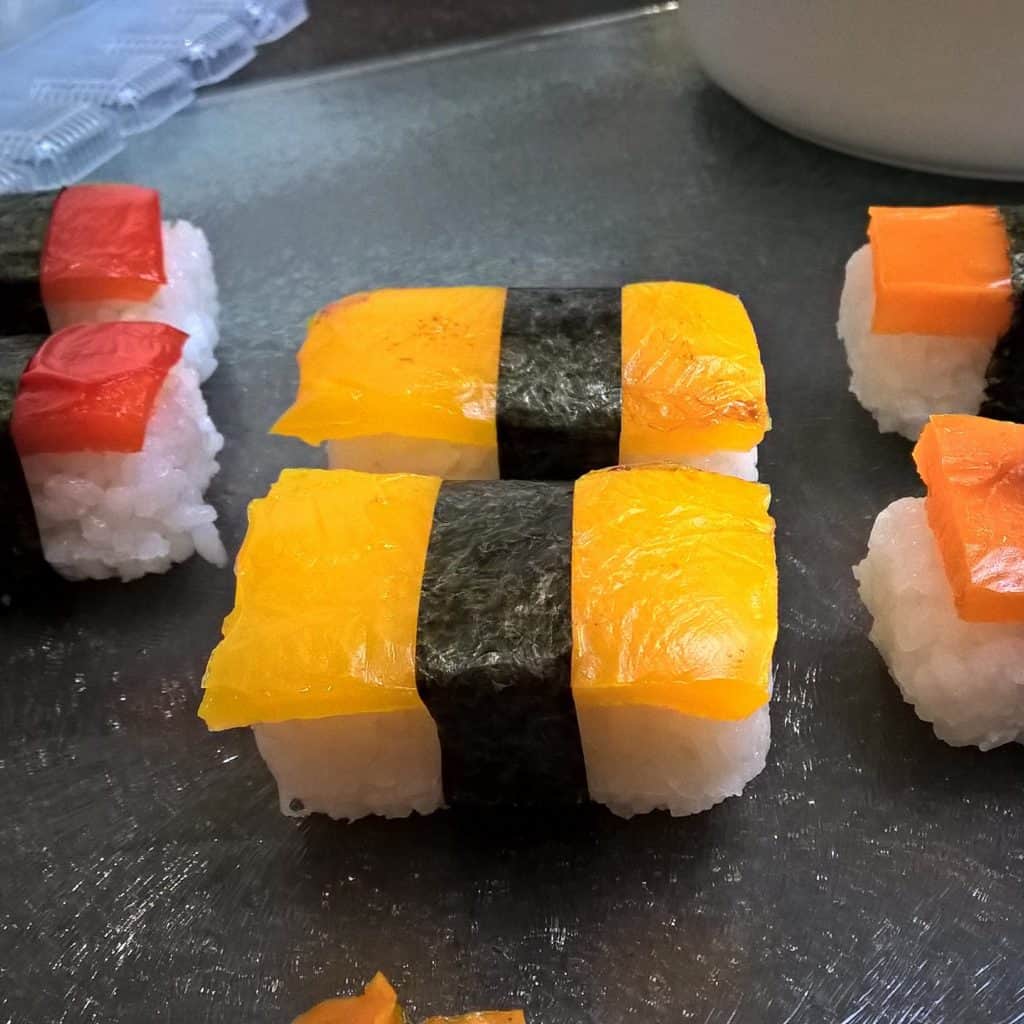 The Nigiri sushi is the only sushi I’ve made in this post that does not come with the kit, there are lots of individual sushi presses you can get online, I’ve also got a large and small triangle press which I imagine I’ll use in the same way as this version and place something pretty on top! again, that can wait for another post. These are by far the easiest of the sushi’s to make yet still impressive.

TOP TIP: for the homemade sushi presses, use the handle part as a press to make the well in the centre of the rice for your filling. If that was clear as mud here’s what I mean below!

Disclaimer: I’ve used affiliate codes to link to ingredients or equipment I’ve used above, this costs you nothing but if you do click and buy I get a few pennies for sharing the link. every little helps me continue this blog. Thank you. 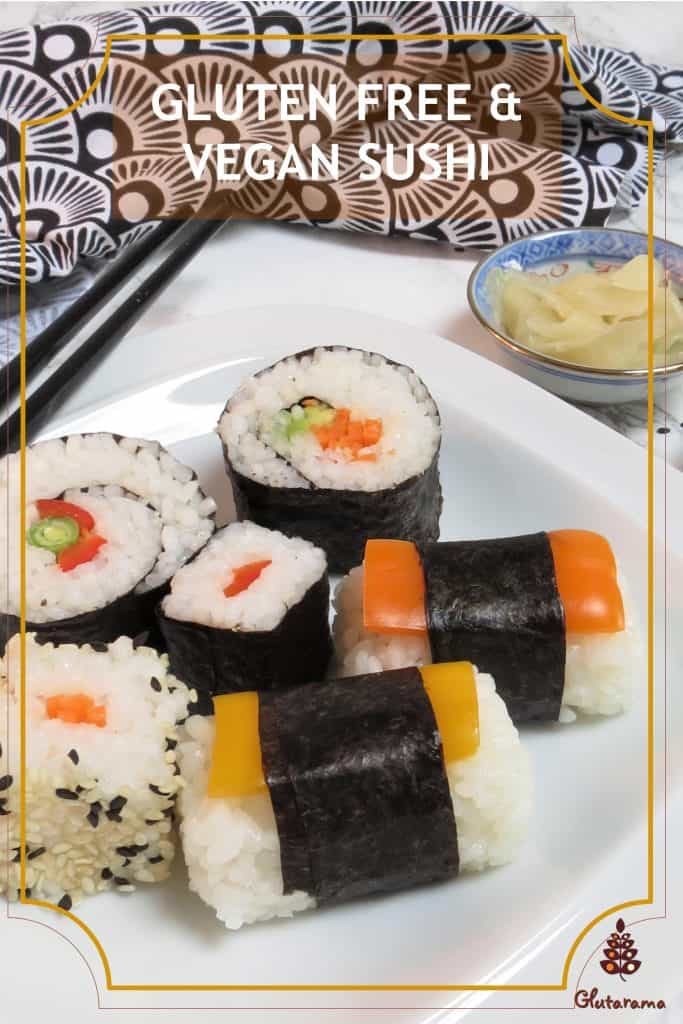 And one last thing! I’ve linked my Gluten Free Sushi with these other awesome bloggers pages, go check them out 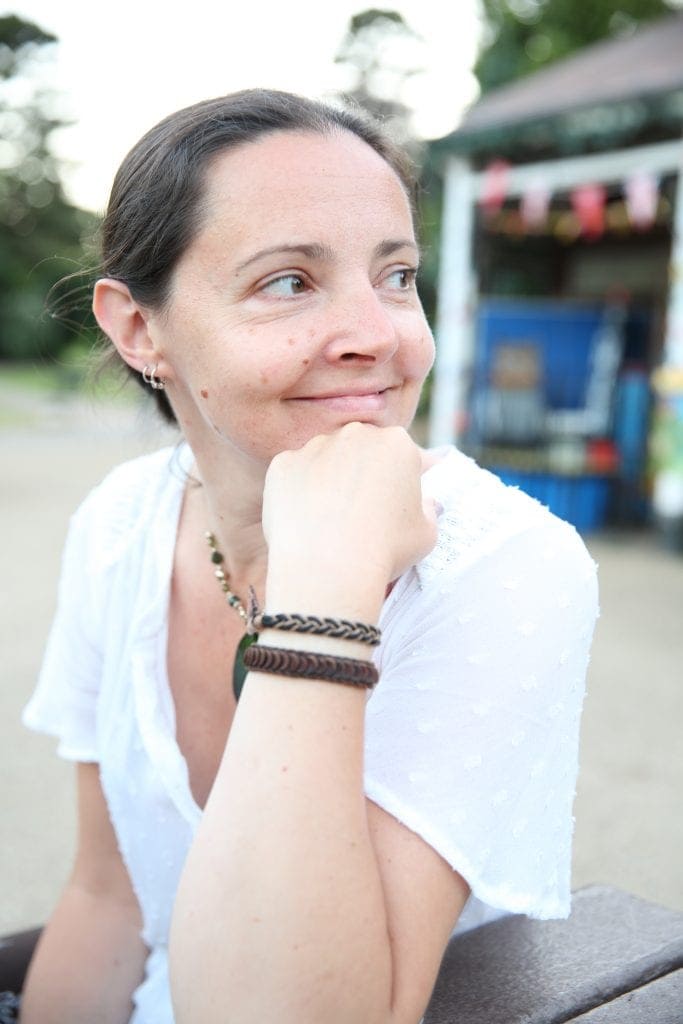 My name is Rebecca, slightly bonkers but can you blame me! Juggling work and two teens with additional needs plus a great combo of special diets. Welcome to my site you lovely person you!