This Eve’s Pudding recipe was another way to use up some apples my family had harvested from our local community orchard. We’re so lucky to have such a thing in our area and it’s beautifully kept. We only ever harvest what we want or need. However, my family are getting fed up with apple crumble (rude!) so I changed things up a bit and made a recipe I remember from my childhood.

It took a couple of attempts to get the sponge element just right and how I remember it. But I did it, and as they say ‘the proof is in the pudding’ quite literally! Incidentally if you are a crumble fan you may want to try my Toffee Apple Crumble; gluten free and dairy free or how about this Gluten Free Gooseberry Crumble.

Where did Eve’s Pudding come from? (part 1)

Researching the origins of Eve’s Pudding sent me off in two separate directions, both equally as fascinating. One direction I hadn’t excepted was Mother Eve’s Pudding. Documented in several housewife cookbooks in the 1820-50’s published by New York Press. Then a later version in 1864 in Australia. The recipe is in poem form and not quite like my Eve’s Pudding but I wanted to share it with you anyway.

If you would have a good pudding, observe what you’re taught :

Take two pennyworth of eggs, when twelve for a groat

And of the same fruit, that Eve once had chosen,

Well pared and well chopped, at least half a dozen;

Six ounces of bread – let your maid eat the crust,

The crumbs must be grated as small as the dust;

Six ounces of currants from the stones you must sort,

Lest they break out your teeth, and spoil all your sport;

Six ounces of sugar won’t make it too sweet,

Some salt and some nutmeg will make it complete;

Three hours let it boil, without hurry or flutter,

And then serve it up, without sugar or butter.

Edward Abbott’s English and Australian Cookery book (for the many and the upper ten thousand), the first cookbook published by an Australian, in 1864

Where did Eve’s Pudding come from? (part 2)

The belief is that apple was the forbidden fruit taken by Eve in the Garden of Eden. This simplistic recipe is a nod to that indiscretion. Personally I love the fact that Eve is on record as the first human to have taken part in ‘scrumping’ I love the idea of a little scrump and even when we go to the local orchard and pick, well within our rights, I still giggle and call it scrumping.

Trouble is I’ve still not told you where the more contemporary Eve’s Pudding comes from. Truth is I can’t find out how it came to be this simpler version. That’s what’s so fascinating. plenty to dig up on Mother Eve’s Pudding and if you want another rabbit hole to go down you could research the Duke of Cumberland’s Pudding which is pretty much identical to Mother Eves Pudding but 100 years earlier.

Incidentally, these recipes refer to currants and having to take the stones out. Currants are we call plums now, hence having to remove the stones.

I have a theory, that the Eve’s Pudding we know and love in the 20th and 21st Centuries is just a simpler version with less fat. It may also have had a few ingredients shaved off in the 1940’s during the second world war when rationing was brought into effect in the UK.

Can I make Eve’s Pudding vegan?

This recipe is vegan as I have developed it with no eggs or dairy. It is of course also gluten free. You’re more likely to want to know if you can use eggs, milk and butter. The answer to this is yes. However, you need to tweak the quantities. It’s quite simple, just add one beaten egg and only add 120ml of milk because the egg will make up for the extra 30ml (roughly the equivalent to an egg).

If you are new to baking gluten free and vegan you’re going to find this post really useful Ingredients and Simple Recipes for a Gluten Free Veganuary, the post is aimed at Veganuary but the same tips and advice apply all year round.

How do you prepare apples for Eve’s Pudding?

Two simple methods can be used to prepare apple for this Eve’s Pudding. I use both methods and the one I chose at the time depends on the time I have to spend on baking.

Method 1: peel, core and chop your apple into bite sided cubes. Add apple to the oven proof dish you plan to use and add a tablespoon of water. Pop into a microwave and cover with a plate. Heat for 30-60 seconds depending on your microwave. This will soften your apple just enough.

Method 2: follow the steps above to prepare the apple pieces then add them to a medium saucepan. Add a tablespoon of water and cover the pan with the lid. Gently heat for 6-8mins for a slightly softened fruit. Longer and you run the risk of getting stewed fruit that you’d use for a an Apple Charlotte, Crumble or Apple Turnover.

Can you reheat this Eve’s Pudding?

You can serve this Eve’s Pudding straight away deliciously hot with custard or cream. Alternatively it’s lovely served cold too. I normally make enough for 6 portions so two more than people in this house so there’s always leftovers.

What’s the best way to store your pudding?

This pudding is happy to be chilled in the fridge and reheated in the microwave for 20-30 seconds the next day. In fact, this will keep just fine in the fridge for 3 days as long as you keep it covered.

If you love this pudding, check these recipes for inspiration 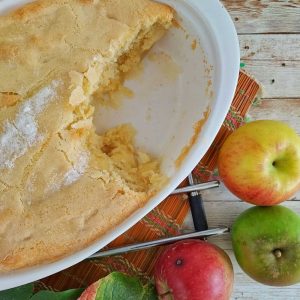 For the apple base

For the sponge topping

To make the apple base

To make the sponge batter

To build the Eves Pudding