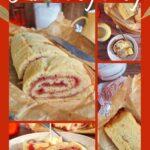 I got out my trusty Mrs Beeton’s ‘Book of Household Management‘ and there it was, the recipe for a simple suet crust add some jam and hey-presto. Didn’t I have egg on my face. Let me rephrase that, there was no egg in the recipe so this is in fact a Vegan Jam Roly Poly too if you make it with my Homemade Gluten Free Suet Recipe.

Where does Roly Poly come from?

The dish was invented in the early 19th century and comprises a flat suet pudding spread with jam, rolled and steamed

The Guardian – The Joys of Jam Roly Poly

Jam Roly Poly is 100% British and can be dated back to 1845 all thanks to Eliza Acton a food writer and poet who lived 1799-1859. Her recipe for Roly Poly was printed in her book ‘Modern Cookery for Private Families‘. This recipe gave you the option to use jam, marmalade or (sweet) mincemeat.

Mrs Beeton republished a similar recipe in 1867 in her ‘Book of Household Management‘ but this just suggested jam as a filling.

Do you add sugar to a Jam Roly Poly crust?

In 1874 the UK Government removed heavy taxes on sugar, making it more widely available for all classes and not just the upper middle and upper classes who had, up until then, enjoyed in it their tea and coffee.

This seem to coincide with puddings becoming sweet so we can assume it had a great deal to do with the evolution of puddings as we know them now.

Some recipes on the internet have sweet crusts for their Jam Roly Poly’s but I’ve kept mine old fashioned and more authentic to the Mrs Beeton version from 1867.

That said, I have added a teaspoon of vanilla extract which you are free to omit if you like.

How to make a gluten free and vegan suet?

Homemade Gluten Free Suet Recipe
This super simple recipe for making your own gluten free suet is a great way to open up lots of exciting recipes you’d possible not considered before such as Jam Roly Poly, Steak & Kidney Puddings and of course the old favourite; dumplings.
Check out this recipe 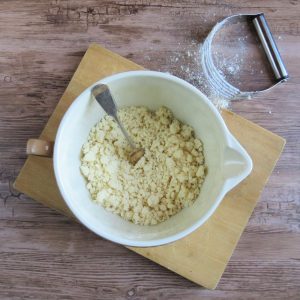 Can you buy gluten free suet?

Yes you can, it is available on The Vegan Kind Supermarket. The brand Suma make a gluten free vegetable suet that costs £2.19 before P&P. You can also now buy a vegetable suet from Tesco and Morrisons that is made with rice flour rather than WHEAT. It’s worth pointing out that the UK brand Atora is NOT gluten free as it has WHEAT in it.

OR – you can make your own gluten free suet using a £1 block of vegetable fat and some gluten free flour and end up with 300g of suet that will keep in your fridge of freezer for months.

How do you make a Jam Roly Poly from scratch?

I find it’s much more effective to measure out the dry ingredients into a large bowl, then heat the milk or plant alternative with the butter or butter alternative with a dash of vanilla extract. This wet mix of ingreidents is then poured into the centre of the dry ingredients and I simply work the mixture gently with a spatula in a figure of eight until its only just combined.

The key to this suet crust is to NOT OVERWORK IT.

Keeping that in mind I tend not to roll the suet crust out but instead I place the suet dough onto a very well floured surface and press the dough gently into a short rectangular shape about 24x28cm.

The dough is very light a soft so take care rolling it towards you once covered with jam.

I use a cake spatula to help me transport the rolled pudding over onto the prepared paper and foil sheets. But you can use whatever kitchen utensils you have handy to do this (maybe two fish slices?).

How to wrap a Jam Roly Poly ready for cooking?

The fact you have to wrap your Jam Roly Poly, before steaming it in the oven, might put some people off making this recipe. I’m not going to lie, it did me in the beginning.

Hand on my heart, this is super simple – I promise.

STEP ONE: You’ll need a length of foil and an equal length of baking paper. No need to grab a measuring tape just cut a piece one or two inches longer than the distance from your elbow to your finger tips.

STEP TWO: With some melted butter/plant butter (about 1tbsp) brush the baking paper liberally, then place it (greased side up) on top of the foil.

STEP THREE: take the short side of both ends of the foil and paper and create a crease or ‘Z’ to make an expansion joint. Much like you would for the top of a Delicious Gluten Free Christmas Pudding.

STEP FIVE: secure both ends by pinching the foil and folding it in on itself, taking care not to squish the pudding inside.

There you have it, you’ve wrapped your Jam Roly Poly and can now place it in the oven over a pan of boiled water to steam.

How do you cook a Jam Roly Poly?

So I’ve alluded to the fact that you have to steam a Jam Roly Poly but it’s not steaming as you would expect. This form of steaming is perfect for keeping the pudding moist but at the same time giving it a delicious crust.

Traditional Jam Roly Polys are not golden and crisp to the finish, if fact they can often look pale and uninteresting. Lets face it, many traditional recipes from the 19th Century aren’t going to win any beauty contests.

Another thing to remember is that whilst this appears to be similar to the familiar Swiss Roll, it is not, so don’t expect your Roly Poly to form a beautiful spiral. These puddings are rather more flat and dense in structure owing to the pre-rolled before cooking method and the heaps of fat in them.

Cooking a Jam Roly Poly could not be simper.

Pull the tray out far enough to pour half a kettle of boiled water into the tin or tray and gently push back into place on the bottom of the oven.

Pop your shiny wrapped pudding into the oven on the shelf directly above your pan of steaming water, close the door and leave it to steam/bake for 60 minutes.

How do you store a Roly Poly?

Ideally this traditional dessert should be made and then served straight from the oven. However, over the course of my development to make this a gluten free, dairy free and vegan Jam Roly Poly, I made a few puddings. This meant lots of pudding for the family who didn’t always feel like pudding!

Therefore, I can confirm that this can be made and then reheated in the microwave. I would recommend portioning it into slices fresh from the oven and then reheat slices as you want them. I kept my Roly Poly in its wrapping in a Tupperware container on the kitchen worktop for a couple of days but you can keep yours in the fridge if you have a warm home.

Custards to go with your Jam Roly Poly 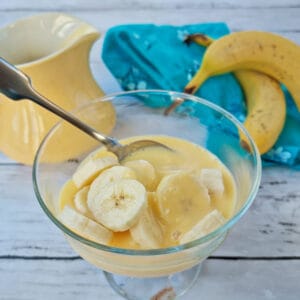 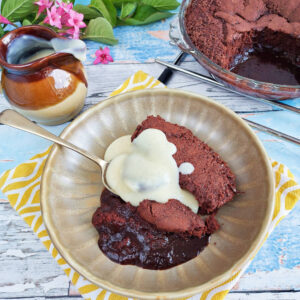 Other comfort puddings made gluten free and vegan

For the dry ingredients

For the wet ingredients

To make the suet crust

To make the paper and foil wrapping

Prep the oven for steaming

To make your Roly Poly

To roll and wrap the Roly Poly

To cook the Jam Roly Poly

Tapioca Starch is a great ingredient to make bready bakes more elastic with a bit of chew. This is a great ingredient to add to gluten free bakes that may otherwise be crumbly or tough.    If you do not have any tapioca starch you can simply add the equal amount in GF self raising flour HOWEVER, as tapioca starch is more thirsty, you may find you need less liquid so I’d recommend adding leave a bit at the end and then add all the liquid if you think your suet crust needs it.

life’s a drama, gluten free doesn’t have to be…. 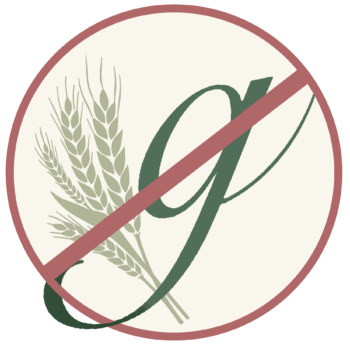